Revenue comprises all the receipts of the government from taxes, custom duties, revenue from state-owned enterprises, capital revenues, and foreign aid. As per the HP budget estimates, the revenue receipts of the government for the year 2020-21 were estimated to be 24.56 % of the GSDP which were 19.86% in 2019-20 estimates. Government receipts can be divided into non-debt and debt receipts. 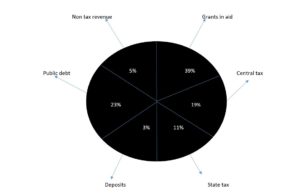 Why tax base collection less in HP-

‘Special category’ status is given by the centre government to assist in development of those states that face geographical & socio-economic constraints like hilly terrains, economic & infrastructural backwardness and non-viable state finances.

States must having certain characteristics to get special category status based on the recommendation of the national development council.