Revenue comprises all the receipts of the government from taxes, customs duties, revenue from state-owned enterprises, capital revenues, and foreign aid. As per the HP, budget estimates the revenue receipts of the government for the year 2020-21 were estimated to be 24.56 % of the GSDP which were 19.86% in 2019-20 estimates. Government receipts can be divided into non-debt and debt receipts.

Tax as a percent of GSDP

HP is a major tourism destination and contributes to a state GDP is about 7% which is quite significant. HP has lots of prospects of tourism which are following. 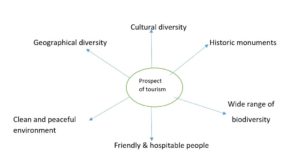 Tourism is a multidimensional industry having an interface with several other sectors of the economy. Therefore it is an accelerator of the overall economic development of the state.

Hydropower is a renewable source of energy along with cheaper as compared to electricity generated from coal and gas-fired plants. HP has immense potential for hydropower as it is naturally blessed with abundant streams and rivers flowing down from mountains. The state of HP has an estimated hydro potential of 27,436MW out of which 24000MW has been assessed.

Hydropower development is the key engine to the economic growth of the state of HP as it makes a direct and significant contribution to the economy in terms of revenue generation, employment opportunities, and enhancing the quality of life.

Revenue generation from flora and fauna-

The term flora relates to all plant life and the term fauna represents all animal life.  In Himachal Pradesh, there is a dynamic relationship between common property resources (CPR) such as forests, water, livestock, crops, and grazing land. Both Flora and fauna are integral to the sustainability of the economy of HP.

The livestock sector of India’s economy is the largest in the world with 537.5 million in population and contributes 4.11% to the GDP of the country.

Himachal Pradesh has vast resources of livestock because 89.97% population of HP lives in the villages of rural areas. According to the 20th livestock census 2019, cattle, buffaloes, goats, sheep, horses are the major livestock of HP.  The livestock provides food and non-food items to the people which are following.

Forests in Himachal Pradesh cover an area of 37948 sq. km and account for 68.16% of the total geographical area of the state.